Just when you thought…

Irvine Welsh, or someone on his behalf, is objecting to a Waitrose poster calling for fruit and veg pickers: PICK GETTING OUT OF THE HOUSE. PICK RAIN. PICK SHINE. PICK FRUIT AND VEG…. PICK PUTTING MONEY IN YOUR POCKET. PICK PUTTING FOOD ON YOUR PLATE… PICK BEING A KEY WORKER… PICK FOR BRITAIN. It picks up on the CHOOSE LIFE rap, There are certainly problems and objections – thanks to Brexit. 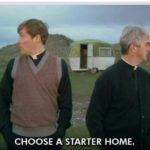 we are suddenly short of a workforce; it invokes a best-forgotten war-time spirit; and it’s purely for commercial purposes.

But Welsh has no copyright on the words CHOOSE LIFE or the theme of the rap. They are in his book Trainspotting, but it was Danny Boyle who bigged them up into the catchphrase of the film. Are there objections when Father Ted and Father Dougal make use of it?

WHAM were wearing CHOOSE LIFE t-shirts in 1980, a decade and more before the book was published. And Moses beat them both by about 4,500 years (Deuteronomy 30:19). Rather than objecting to being parodied, he should be pleased he has contributed to such a recognisable expression in modern UK.

However, it keeps the Irvine Welsh industry going . He’s allowed. It works for him.