All eyes this weekend are on Cineworld, Fountainbridge Edinburgh as T2 premieres tomorrow evening. More on that anon. 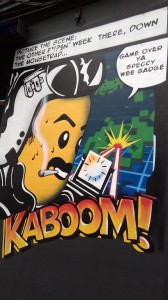 A nice piece of artwork on the wall of what used to be the Volley on Leith Walk (now the Mousetrap - go there, re-live it for yourself), where Tommy witnesses Begbie losing it at the pool table and assaulting a "specky wee gadge"

Nice, eh? Looks like Begbie, but at the games machines they have there now, not the pool table. It’s not just Danny Boyle who has to keep up. Leith is right up there too.

T2 brings the foursome of Trainspotting back together, roughly along the lines of Porno, the book sequel. The previews say it’s a regretful look back at youth from middle age. No suggestion that it takes the larger scene into account, you know, the IndyRef and Brexit. So, no mickey-take of Big Eck Salmond, as I was hoping for in my last blog. It’s personal. Which certainly tells me that in ten or fifteen years time there’ll be T3. That’s a captive generational audience Boyle has created, that likes to see itself grow older on the screen. Why not? – if there’s money in it. Not that it’s small achievement: Trainspotting had to not just capture a moment in the 90s, but also create one, such a strong one that the 90s generation can point to it, tell their children “that was me!” “I was there!” Well done, and good luck to you Danny.

Anyway, there we were, this morning, in the Mousetrap and the Docker’s Club, and other Trainspotting places in between, with Sky Entertainment and Radio Forth and some unreconstructed fans who had organised a reunion weekend in Edinburgh without realising the bit about T2. Look at Sky News tomorrow, around the half-hour for most of the day, and catch Radio Forth tomorrow afternoon for their takes on it all. And tune in to BBC Radio 5 Live around 7.30 tomorrow evening, when I am expecting to be in a studio discussion to fill in around interviews on the red carpet.

I really hope the film is good, after all this!